The local Territory Manager for St John, Robin Eustace kindly picked me up from the hostel promptly at 0730 for the drive down to Bluff. A 30 minute drive would be followed by an 8 hour walk back.

Stirling Point in Bluff is the official finish for the TA for those doing it from North to South. So for me it was the starting point and I was really delighted to have a member of St John there to begin the journey with me. The region has 24 full time staff and another 100  volunteers which makes you wonder how our ambulance service would survive which the volunteers contribution?

A couple of photos later I donned my pack and started out along the Foveaux track which skirts the southern coast of Bluff Hill. 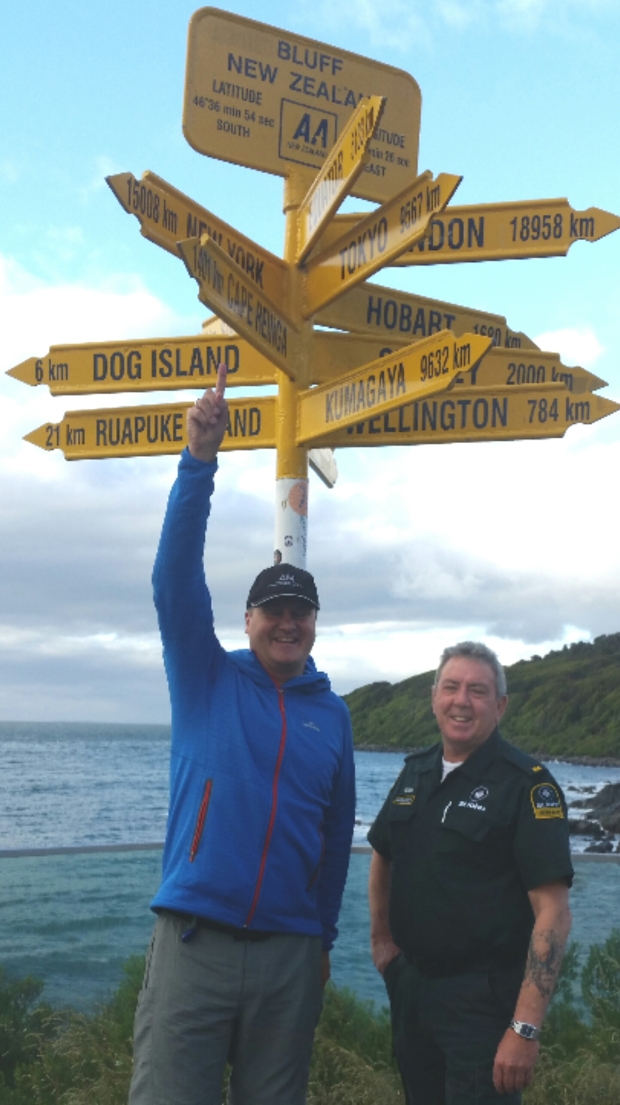 It is a well formed track through wind swept foliage with excellent views of the islands including Rakiura. I shared the track with the bird life who didn’t seem afraid at all and the morning sun was out which took the bite from the brisk Sou’ wester – it was to blow allllll day. I was thinking this was all pretty sweet.

After a while the track came to an end at private land so I climbed the stile and there was my first TA orange trail marker. The trail was across farmland so you just looked for the next pole and made a beeline in its direction. This did include the odd stream, rocks, mud and a beach but for the most part there was a distinct trail in the grass from previous footprints. After 1hr 45mins I popped out onto State highway 1 at the cool metal Bluff sign. I was feeling good, this was easy. 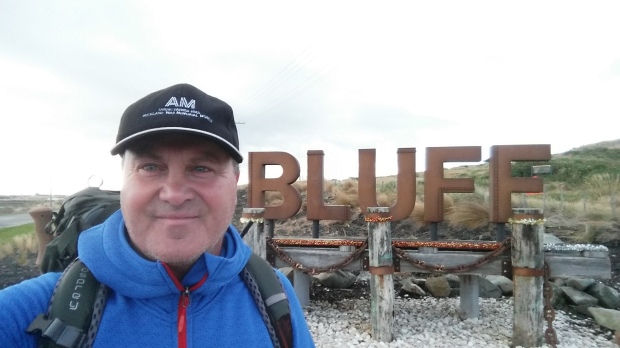 I had read that the next 16km were pretty awful – walking along a highway verge with trucks roaring past is no fun. There were a lot of trucks and to make it more interesting I tried a little wave to get a toot but it didn’t work out very well so I gave up on that entertainment. Mostly they were logging or fertiliser trucks and each one caused a rush of pine or sweet smelling air as it tore past. 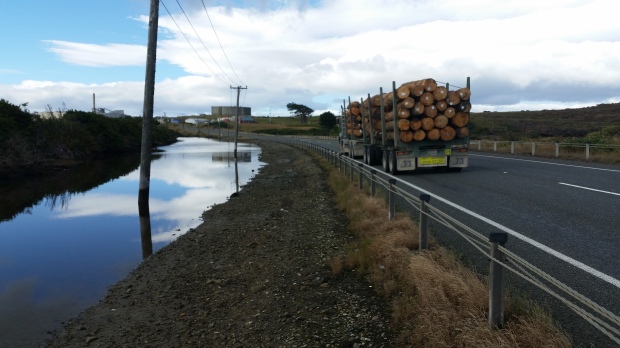 At one point a road bridge crossed the railway line. It had no walking verge at all so I waited for a break in the traffic before darting across to safety on the other side. All along the grass verge was littered with cans and bottles of beer, energy drinks and RTD’s. On reflection, as I got closer to Invercargill, it seemed the most litter was near Bluff so presumably little darlings finish and disgard their last bevvies before they get home.

My luck with the weather eventually came to an end as the showers rolled in, so on went the rain gear and I continued my trudge along the road. I knew that the highway walk would end once I got to the cement works but that walk seemed interminable in the meantime. There is only so much following the line where the tarseal meets the grass before you desperately need a distraction. This occasionally came when trains went past. Train drivers wave.

I arrived at the cycle trail eventually, after 3hrs of road walking. The relief was somewhat short lived as the trail followed the coast with full exposure to the wind. It was ferocious and constant. At one point I checked the speed and it was 45kmh. I was getting blown all about. Still I had another 3hrs of walking so there was nothing to do but get on with it.

I didn’t see another person on the trail all day. My company was pet goats attached to a long wire to eat the front verge, dairy cows, heifers, swans and deer. Mostly they looked on with curiosity or ran away so again no entertainment gained from their presence.

Finally I reached the finish point for the section at Stead Street wharf. Did you know that Invercargill once had a railway which ran on wooden rails? It failed miserably but I had to chuckle at one of the many set backs which was embers from the train setting the rails on fire. From the finish it was another 2km into town and finally boots off! Tonight I bought food for the next section and am looking forward to resting the tootsies.

Tomorrow: Invercargill to Riverton. Another long day along Oreti beach

5 thoughts on “Day 1: Bluff to Invercargill”

My Journey So Far