Luckily I had set my alarm as my room had no windows and was pitch black with the light off. This trip comes with some concessions with comfort and facilities. It was time to get packed and get going. Fortunately everything still fits into the pack, given I was wearing much of my few clothes for the walk today. It will be interesting to see where everything fits in hot weather and I’m not wearing the heavier items. I’m a pack horse with dried food and supplies carried on board for the days across the wilds of the longwoods and Takitimu range. I set off onto Dee Street at 0830 ready to tackle the day. The pack is weighty however it sits comfortably on my hips like it should do so I am happy enough. The morning is cool and clear, perfect conditions and I hope it continues all day.

The trail starts at Steed St wharf so I need to walk there first before setting off to Oreti beach. The road has a wide footpath for walkers and cyclists so it is nice to be out of the way of the traffic. I pass the airport and continue along the road past flash houses. At this pace you have time to notice the small details that are missed when travelling by car. Such as the children’s play equipment in the manicured front lawns. I guess that there are many young families living along this stretch of road. I pass the store at Otatata and pause to consider buying a V drink but decide against this temptation.

After 2hrs walking I arrived at Oreti Beach which curves gracefully from Riverton around to the Oreti river. It was on this 26km stretch of flat sand that Burt Munro practiced on his Indian motor bike and went on to set the NZ beach speed records. I wouldn’t be setting such a cracking pace mind you. In fact looking across the bay I could just make out what looked like it would be Riverton, and a lot of beach in between! There were cars, people and dogs abound at this point however as I continued to walk they all fell behind me and the only other sign of human presence was the plane practising above me and the tyre tracks on a vehicle that had ventured further than the rest. Eventually even these ceased and it was just me, the sea birds, sand and the wind. It was really boring! I tried to liven up the walk by seeing what had washed up on the shore but even the same old bull kelp, popping blue bottle jellyfish and investigating the occasional dead bird got monotonous. I was curious about the unusual seaweed that was all the way along the beach. It is a bit creepy, in an alien way with cream or orange tinged pods that look like chicken feet. I call it chicken foot seaweed for lack of the correct name. Occasionally there would be just two of these pods attached by their spindly legs to a pebble and it would look remarkably like a chicken carcass. Anyway enough of that, there is a town to get to. 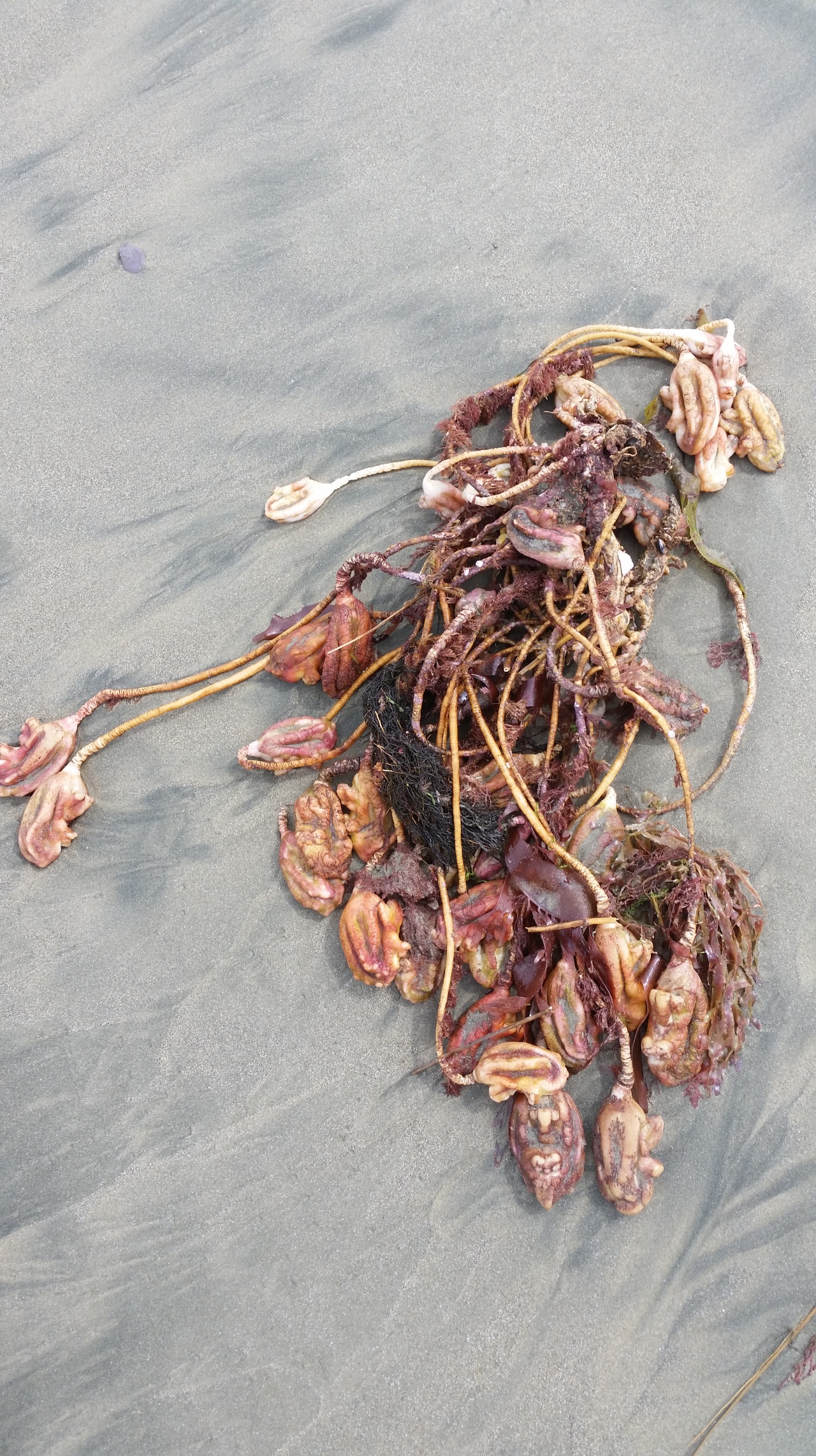 The trail notes indicated a water crossing at the Waimatuku stream which was best to navigate at low tide. I arrived a couple of hours after high tide so the flow over the sand wasn’t too deep. Still it was deeper than I wanted to cross in my boots so it was time to take off the pack and boots and ford it barefooted. I had only just crossed the stream when a 4 Runner came hurtling past, crossing the stream with ease. I gave a weak wave given that if I had arrived at the stream a couple of minutes later I could have thumbed a ride across with the only vehicle passing this way today.

There was still at least 10km to go to Riverton. I could make out the buildings in the distance but being visible wouldn’t make it any more easier to reach. In fact it was quite frustrating that the progress was so slow. I just wanted to get there and drink a V. After a while it became get there and have a beer. Then following some water it became get there and have cod and chips. Finally though I arrived at the orange navigational marker which was the location to turn off the beach and into Riverton. It was such a relief to arrive at the backpackers, take off my pack and have a hot shower. Later I gulped down a pint at the local pub followed by fish & chips – cod and orange roughy yum. By 2030 I was tucked up in bed, curtains pulled as it isn’t dark until 2130 in these parts. The forecast for tomorrow is gale winds and rain so I will take a rest day.