Today I am walking the coastal track to Awaroa starting from the hut at 0830 and passing through the wind swept kanuka towards the hill which goes over to Mutton Cove. There are predator traps all along the side of the track which belong to Project Janszoon – this is a privately funded trust working with the Department of Conservation, the Abel Tasman Birdsong Trust, the community and local iwi to restore the ecology of the Abel Tasman National Park over a 30-year time frame. Named after Abel “Janszoon” Tasman, the trust aims to reverse the trend of ecological decline in the park by reducing predator numbers and weeds, restoring ecosystems, and re-introducing native birds, animals and plants into a thriving park environment. Project Janszoon was launched in 2012 and will complete its work on the 100-year anniversary of the establishment of the park and 400-year anniversary of Abel Tasman’s “discovery” of New Zealand in 2042. The success of the project can be heard in the chorus of birds throughout the track which are some of the best in New Zealand and certainly better than most places I have walked though to date.

From Mutton Cove the track rises into the bush then descends onto beautiful beaches. Each one seemingly more gorgeous than the last. They certainly are a compelling reason to make this Great Walk just in order to experience, and be reminded of, the stunning scenery which we have in bucket loads in New Zealand. This is why so many visitors to our country have the Abel Tasman track on their ‘must do’ list, its just so remarkably beautiful. Fortunately on this part of the track, which is slightly off the beaten track, is nicely quiet with very little other hikers and few day walkers. Anatakapau Bay has a long gentle curve of fine golden sand, followed by the little bays of Anapai where you might be forgiven for thinking that you have died and gone to heaven. 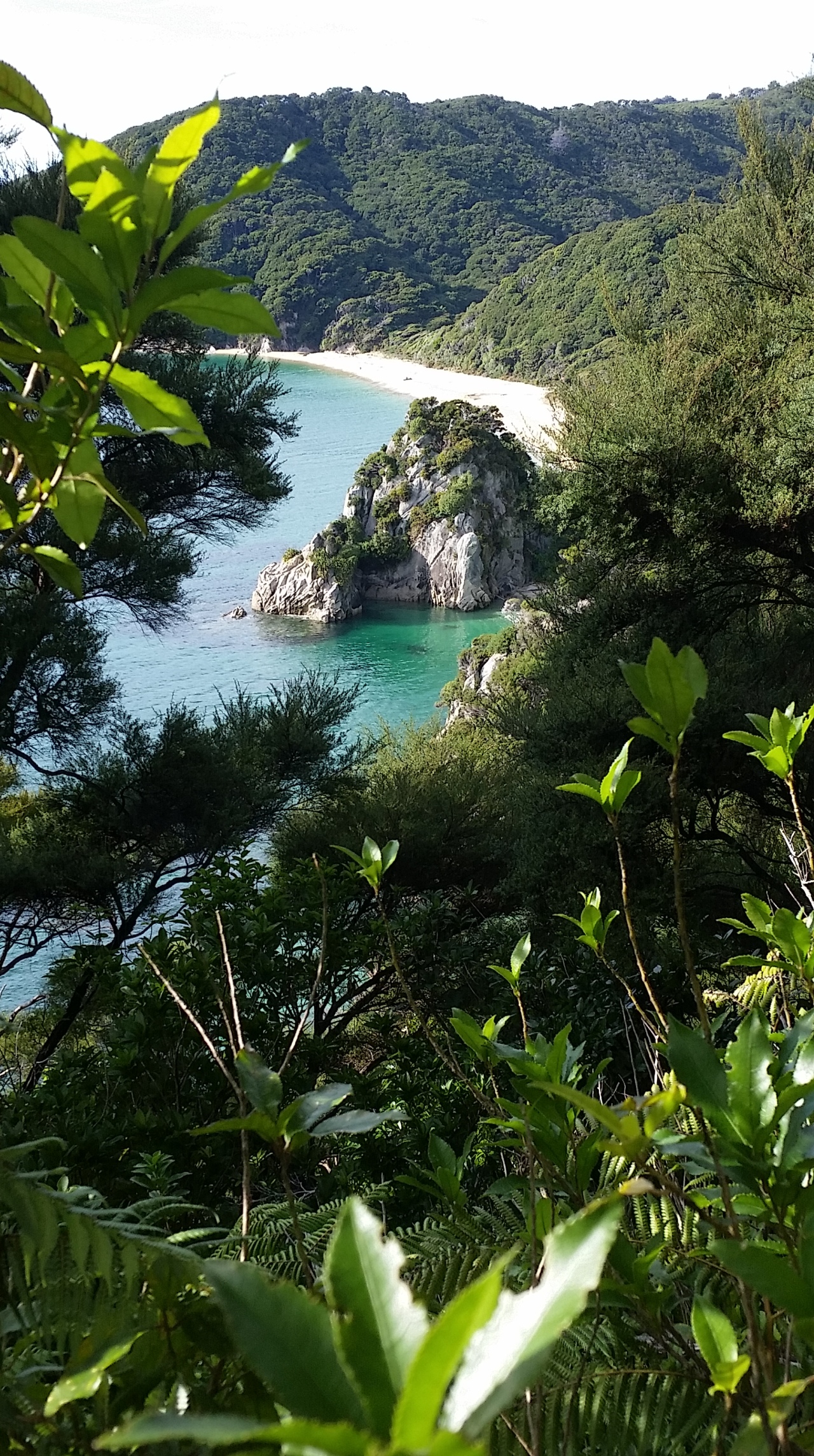 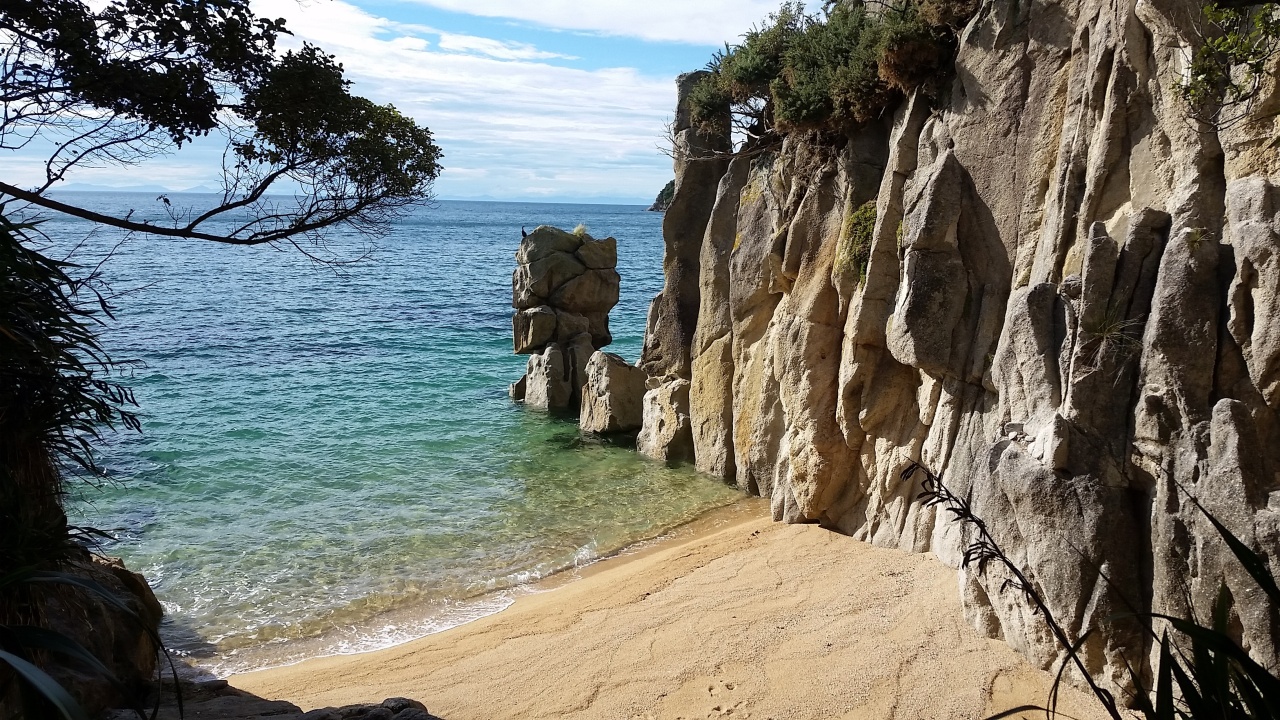 The next destination is more populated as there is road access from Golden Bay and ferry access from points further down the park. This is Totaranui beach. The first European settler and landowner here was William Gibbs. Gibbs established a farm of over 7000 acres and supplied Nelson with milk and dairy products. He also built two holiday cottages that he rented out to holiday makers. Even back then this coast was a popular holiday destination. The track goes right past the Ngarata Homestead. Ngarata was built in 1914 for the Pratt’s son Bert, the Pratts purchased the farm in 1892. William Gibbs’ original homestead was also located along this ridge but was burnt down around 1924 after which Ngarata became the main homestead. Ngatara was built in the very modern (for the time) Californian Bungalow style and is one of the very first examples of this style in New Zealand. The view from the extensive & broad veranda, The Avenue can be seen in the distance. Old photos on display show women in long flowing petticoats & skirts with parasols walking in the gardens and looking out from the veranda. What a grand but isolated life they would have lived. The Avenue leads into Totaranui campground and beach. William Gibbs planted the London Plane and Macrocarpa trees along the Avenue in 1856 as he wanted an imposing entrance for visitors arriving by sea. And of course this was the only way people arrived, there were no roads back then. There is a very popular campground at Totaranui, one of the largest in New Zealand plus a small manned DOC office with information on the park and for hikers, fresh water, toilets, phone boxes, cellphone charging ($2) and even free but meager WiFi. 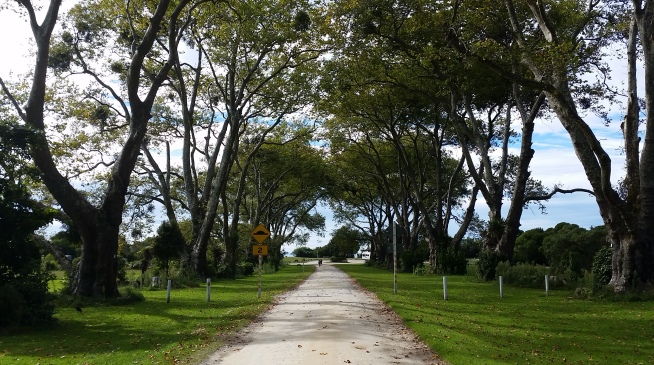 There are a number of tidal harbour crossings that need on be made on the Abel Tasman walk. Often there are high water alternatives provided but one that can only be crossed at low tide is at Awaroa Inlet that can be crossed from anywhere between Sawpit Point and the sandy shore in front of Awaroa Hut. A large orange triangle marker indicates the point where the track continues on the other shore and is clearly visible (with young eyesight) from across the inlet, which is around 1 km wide at this point. The low tide time today is 1714 and with everyone being as well read as we are, know that it could be crossed from 1.5hrs before low tide. Therefore hikers have been gathering at the shore for hours prior and there is a jovial atmosphere as we all chat and contemplate the retreating water whilst slapping at the sand flies. A tall Dutch hiker chick is the first to set off, followed by a small group of 4. Its exactly 1.5hrs before low tide however the rest of us think it is still too deep and remain where we are. Soon after we can see the Dutch hiker up to her waist already – none of us want to get that wet. Shoes are removed as even at low tide, we can expect to get wet feet crossing the sandy expanse of the inlet and its intermittent banks covered in seashells. I set off to join the group of 4 who are standing on the edge of the water, which is now about 200m away. As I approach they decide to set off across to Awaroa as well so we all gingerly proceed into the ankle deep water. The sand is fairly firm and the seashells give way easily underfoot without pain. The water is clear making the decision where to cross the sandbanks and deeper water relatively simple. Still we all take slightly different directions across the inlet. The water is getting shallower very quickly and by the time I reach the Awaroa side there is minimal water behind me for the others to ford. On the Awaroa side are hikers making the walk across the inlet. They haven’t been so impatient to cross, or maybe were waiting to see if we made it across safely. 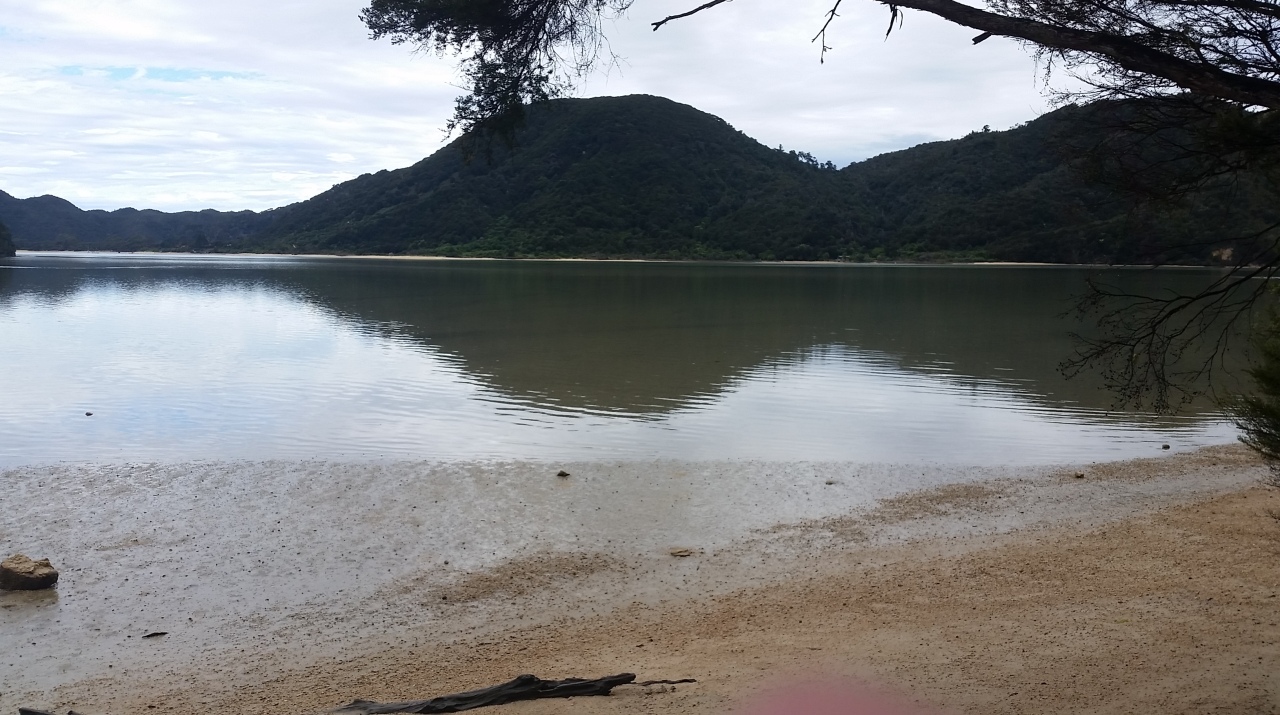 Once on the Awaroa side of the inlet I put my shoes back on and continued from the DOC hut (it was fully booked) towards Awaroa Lodge, another 40mins away. The sandspit nearby is the one where everyday Kiwis bought this slice of private Abel Tasman shoreline. Almost 40,000 people pledged $2,278,171.09 to buy the beach and the bid made it over the line with help from the Government and an anonymous donor. At Awaroa Lodge I am staying in their separate backpacker accommodation called Abba Lodge – it is fully self contained and I had it all to myself.