It was Robin’s birthday today so him and Chloe were going to try to get to Te Anau for a celebratory dinner. I said goodbye and left the hut at 0800 as they were setting off as well. The morning was overcast and threatened with the possibility of some rain so I had the wet weather gear on. My first destination was Boundary hut of about 6km along the 4WD track. The track was undulating but it was nice and cool so I made it in good time, quicker than expected. I stopped to complete the ‘intentions book’ which one does even if not staying. This is for your own safety as it registers for search and rescue your last entry and your intention. Then it was across the swingbridge and onto the next hut which was 12km distant. 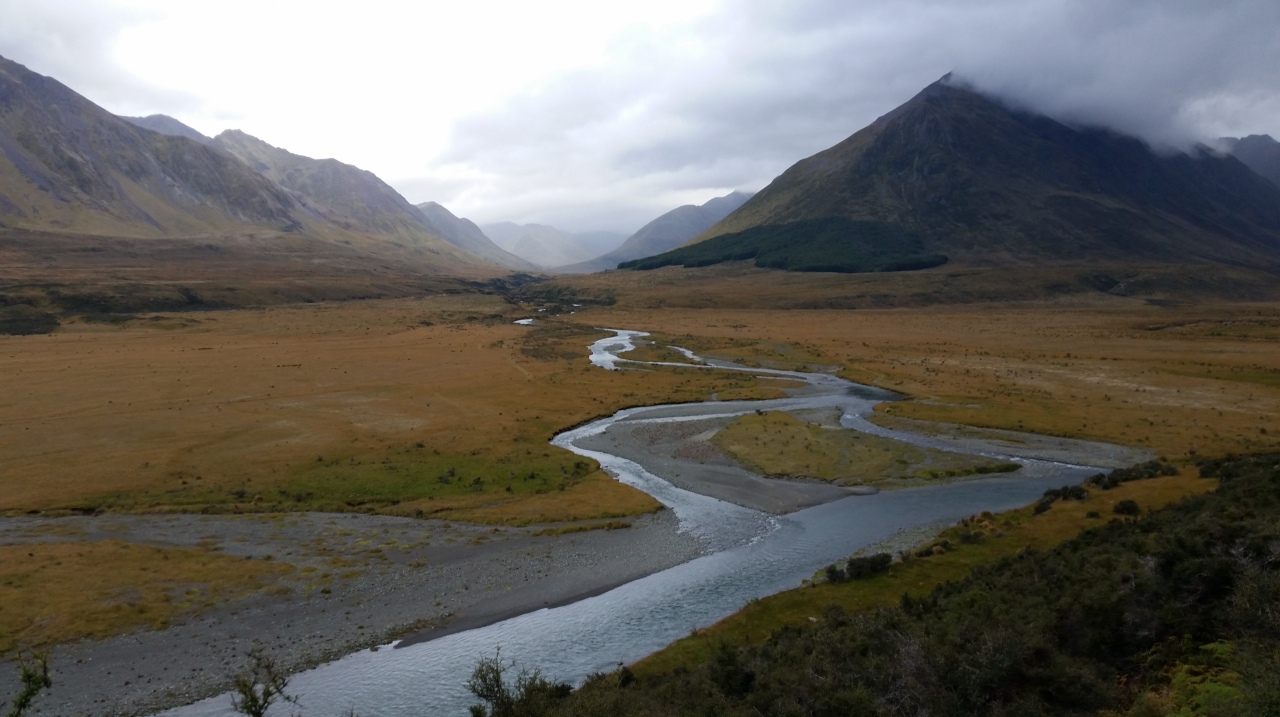 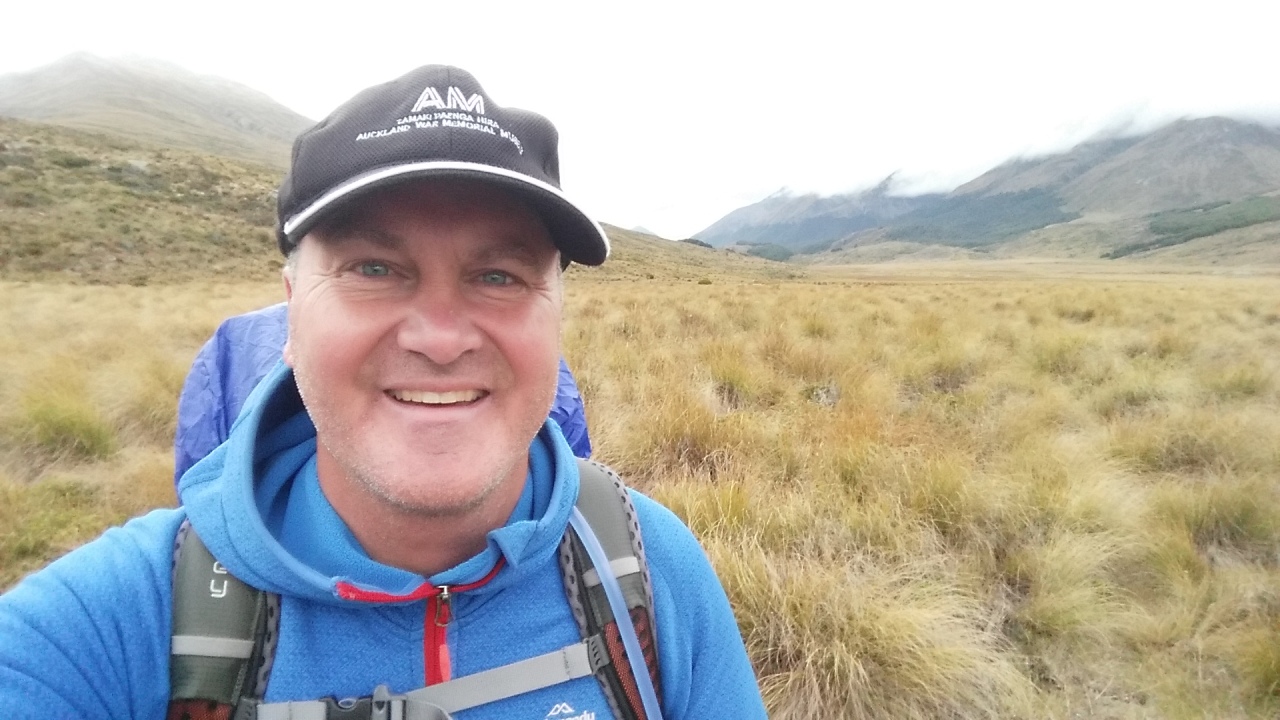 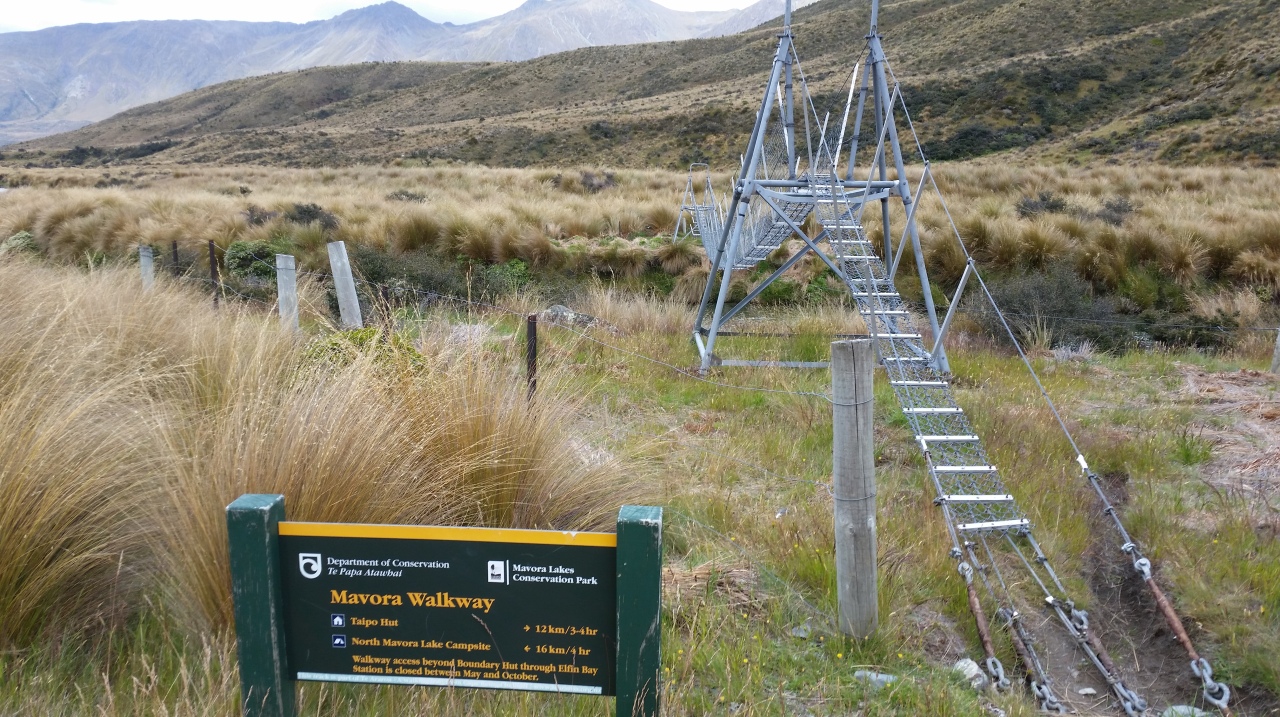 By this time I didn’t think it was going to rain so had removed my rain jacket. It was just too hot with 3 layers on. Mount Mavora loomed over on my left and the Thomson Mountains stood to the right. The Mararoa river ran down through the valley. The trail sometimes followed paths made by 4WD bikes and at other times just went along the side of the hills or straight through the swampy tussock. The marker poles were sometimes difficult to spot over the tussock or around the brow of rocky outcrops and I got off trail a couple of times. But nothing too drastic. There was no point being nimble through the swamps mud water and streams as the feet were already wet so it didn’t matter. I did still keep an eye to the ground however as I didn’t want to go into a knee deep hole thank to very much. I met a few couples early on and we did a quick bzzz. By this time I was confident of making Greenstone hut today. Everyone I met said the last bit is only 3hrs,not 4-5hrs as the DOC sign indicates. It was so regularly commented on by everyone I passed that I was beginning to wonder if there was another sign saying ‘tell everyone you meet that it’s only 3hrs’…

I reached a boundary fence of about 7 wires, 2 of them barbed. There was no gate nor stile yet marker poles on either side indicated this was the correct way. There was nothing to do but take off the pack and slide it underneath the lowest wire, then cross it underneath myself. I was pleased it wasn’t raining and I would have had to make a muddy slide across. A little further along I could spot a bench seat. Wow I thought how nice of the station owners to provide a seat with a view. I had thought every day of the walk so far that it would be great to have benches every few hours walk to rest on. It turned out that this was actually an old stile from a long dismantled fence. Still it did the trick. I was motoring along and reached Taipo hut by 1300. Two TA’s were just finishing lunch and leaving as I pulled in across the swingbridge over the Mararoa river. The trail notes say there is a fantastic swimming hole here, but it wasn’t the weather for a brisk dip today. I had a quick rest stop before heading off again. 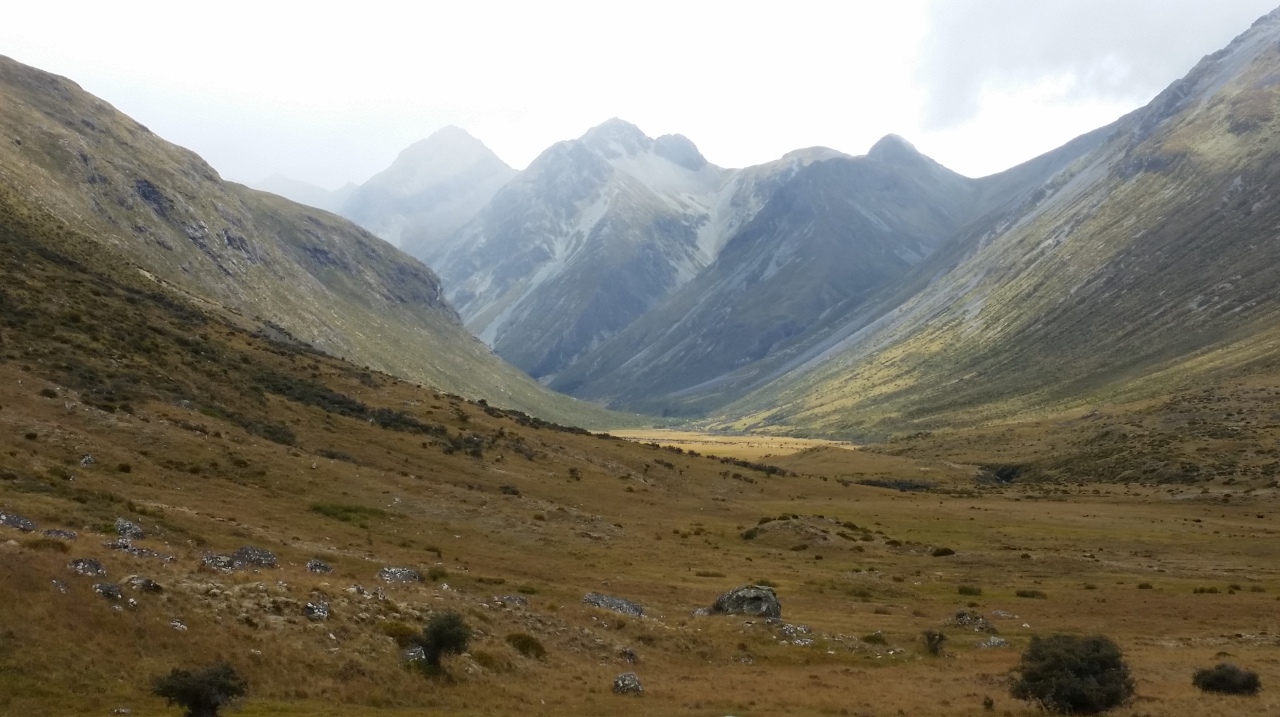 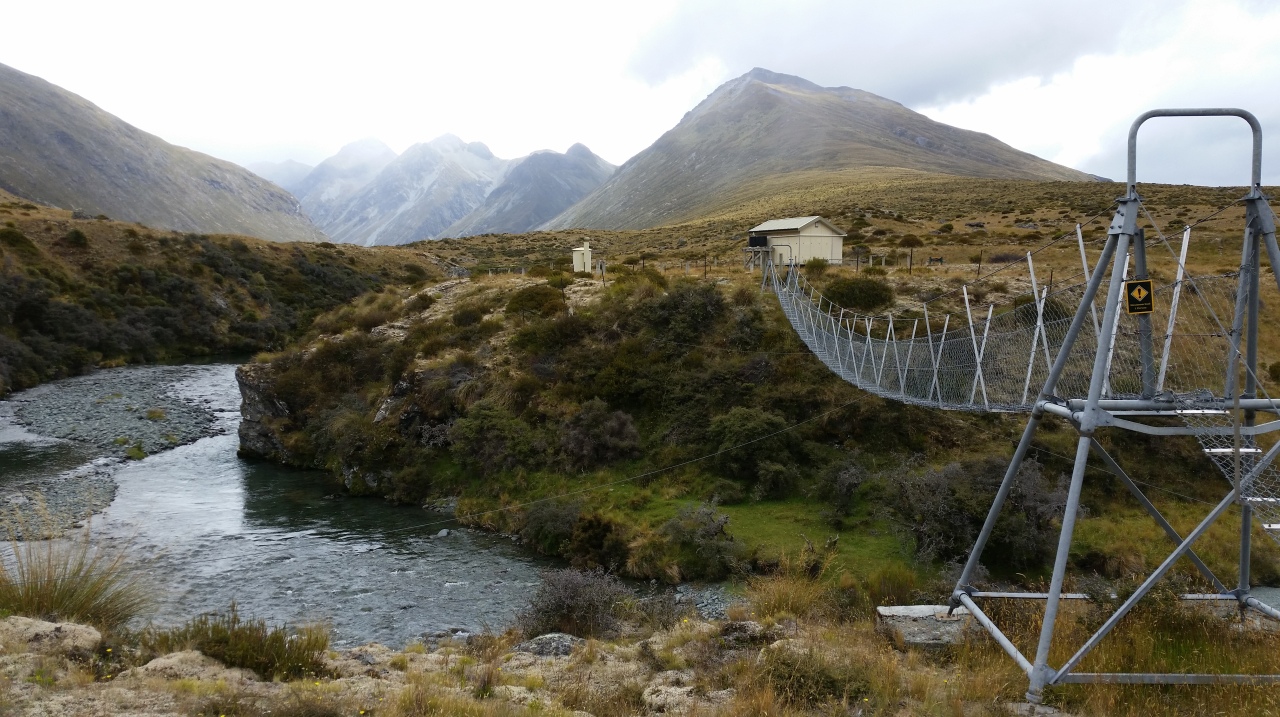 There was another 10km to cover (3hrs I know) to the Greenstone hut. The trail would continue through very wet swamps and tussock before a gentle climb over the Pass Burn saddle. Then it would drop down to the hut. Some of the moss and fine alpine grass reminded me of the view from an aircraft as you are flying over from a great height. They looked like Lilliputian islands and made me wonder if Jonathan Swift had the same idea for his Gulliver’s Travels. My giant boots stomped unceremoniously across these lands.

Before long I was on the gentle climb across the saddle and into the beech forest. I have come to not enjoy beech forests very much, they are the nemesis to my walk. Why so? Well it is the combination of roots and mud that I associate with them. The beech trees have an extensive but shallow root system. These roots spread laterally across the ground and make excellent trip hazards but they don’t support the trees exceedingly well, so when the tree falls there is a massive circle of roots and soil raising perpendicular to the forest floor. Somehow the TA track always seems to be right in its path, how do they do that? And then there is the mud. The beech trees shed a lot of leaf material which makes for a spongy floor to walk on but like a sponge it holds so much water which amalgamates into tracks and puddles of dark chocolate brown mud. I would wash the mud off in a clear stream then step immediately into more mud. On and on this goes until you get out of the trees. So let’s just say I am not a big fan of beech forests. If it was a star sign I wouldn’t want to be beech. Sorry to the beech lovers out there but if you disagree with me you can write your own blog on the subject. 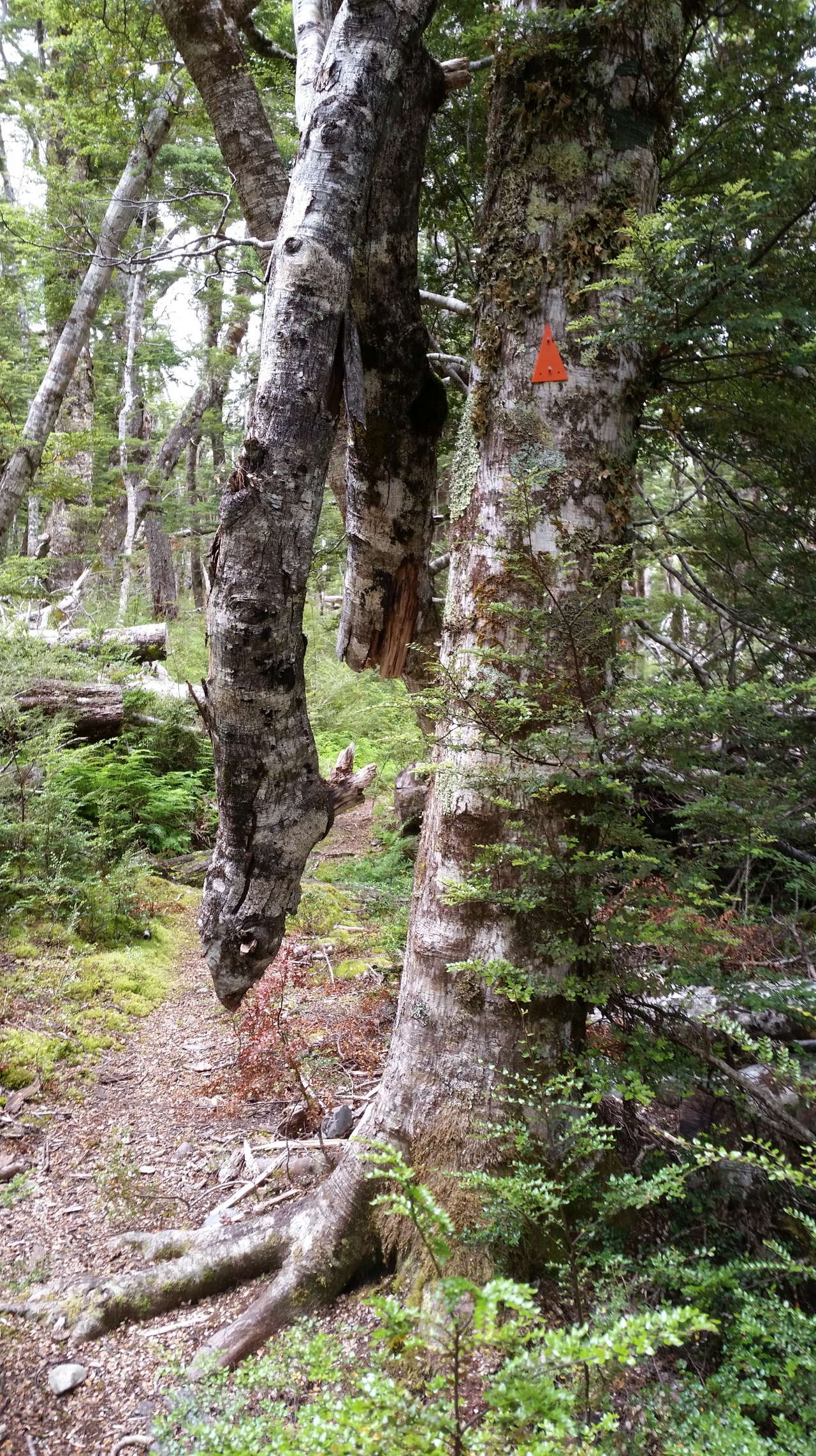 The trail descended steeply and roughly before arriving at the glorious Greenstone Hut. There were ready about 9 trampers there when I arrived at 1630 (3hrs!). The hut is large and new with picture windows, flushing toilets, two bunk rooms for 20 and an annex for DOC staff. It’s position on the Greenstone and Mavora tracks means it is well patronised. The night prior it had been chokka and some had to sleep on the communal room floor. Fortunately I had a bunk for the night. There was a great bunch of trampers. I particularly liked a mature couple from the UK who were lean and interesting – they looked like seasoned trampers and they would put my tramping to shame I reckon. Also there was a lovely lady from Manapouri who had been raised on the Dingleburn Station which is on Lake Hawea. Such fascinating people from all walks of life.