A good early start this morning has me on a virtually deserted road through toward Omarama. The trail is the highway verge (for a walker) from Otematata across the Omarama saddle and down to Lake Benmore for about 12km. It wasn’t so bad this early in the morning as it was still cool and there were apple trees every now and then for a snack. With no traffic it really helped to keep a good pace and I was up and over the saddle in good time. The descent to the lake was less enjoyable as my knees and left shin don’t like downhills. Plus it didn’t seem to be getting any closer despite the walking effort. Come it did however and I stopped at the lakeside at Sailors Cutting for a pic and a nosy at what was happening. A truck was winching a vessel out of the water and there were guys in wetsuits watching intently. I sidled up to another onlooker to find out but he didn’t know what was going on so I had to ask one of the wetsuits. They dredge the lake weeds using a jet boat and two enormous vacuums – the dredged material goes into the vessel which is like a massive sieve, letting the water pass through but not the weeds. Then suddenly the truck is on its way and the wetsuits give chase. It has a cloak and dagger feel to the whole thing, like we were not supposed to know what they are doing. Quite odd. 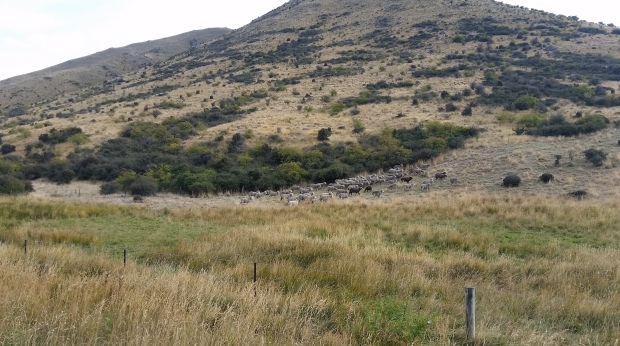 The trail now follows the lake edge, it is well marked and like always on Alps 2 Ocean in good condition. The white limestone makes for a nice track. A tour coach stops above me for its passengers to snap the scenery – I agree it is very picturesque here. Whilst I am trying to remain inconspicuous on the trail below. There are many cyclists today including a couple on a tandem bicycle who look to be in harmony. I suppose they have at least come from Mt Cook already so would be in sync by now you would hope. I stop at apple trees for the fruit and shade of there is any. It is hot and dry by now. Cars are parked by the lake and I can see partiality submerged fisherman trying for trout. Lake Benmore is the second most fished lake to Taupo. The road and trail climb to Chain Hills for another small saddle and I can see Omarama in the middle distance. It is very dry and dusty. Barren where there has been no water for months. A farmer sends his huntaways up a rocky cliff – they bark, he whistles, they bark, he yells. I think I can see one or two sheep standing on a rocky ledge – they are not going anywhere and I don’t blame them as it looks to be a treacherous outcrop. One slip and you’d be history. I wonder if it is all worth the effort for a couple of sheep? A few minutes later the ute goes roaring past down the farm track with the dogs onboard – I’d bet anything the sheep are still there.

Once I get to Omarama I can get the lay of the land; pub, a Four Square, two petrol stations, fire station, some motels and holiday park. I check into the holiday park for a couple of nights. I am a day earlier than expected but the forecast tomorrow is for rain plus I need internet for the blog. The holiday park fills with caravans, motor homes and vans. It is a busy place and very well maintained. This evening I go to the pub where I meet Dave’s and Keith. Dave bought a Model A Ford in Queenstown and they are driving it back to his place in Whanganui. They are great company for the evening. 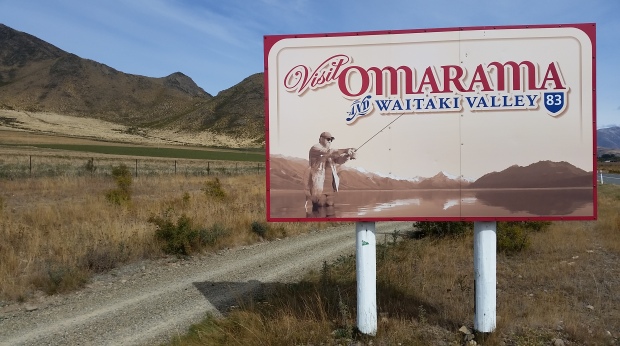 2 thoughts on “Day 43: Otematata to Omarama”

My Journey So Far