Today will be a first for me. My friend Nick is travelling across from Christchurch this morning to walk with me. He will be my first arranged walking companion and I couldn’t be more pleased to have him along. Nick inspired me with his foray into the world of Crossfit exercise, which he still endures – it was his determination and perseverance which provided a measure of impetus for me to just do my walking journey rather than talk about it. The generator kicked in at 0700, our technology all beeping to this impromptu wake up call. There was now lighting and hot water to get prepared under for the day. Nick arrives in time for breakfast which we gobble down as we are both keen to get on the track. At 36km it is a decent distance to cover in one day. The weather has cleared since yesterday and we can actually see the scenery which had been elusive the previous evening. The sun is trying to clear the clouds and it should improve during the day. We say Adios to Ma & Pa, collective photos completed, and head off down the road leading out of dodge. Fortunately there were no gunshots above our heads so I think we left on good terms. The track sunk into the native bush and we were surrounded by podocarp forest and low level shrubs. The trees hang with moss and vines giving it an eerie Jurassic Park look. We soon realise that we are both a bit shaky when it comes to naming the flora so we will just have to leave that knowledge in the bush for you to discover for yourselves one day… We have set a steady pace and the trail is easy walking with a wide metaled path. Shortly we arrive at the Macpherson creek suspension bridge which crosses a mighty high gorge and stop for photos. 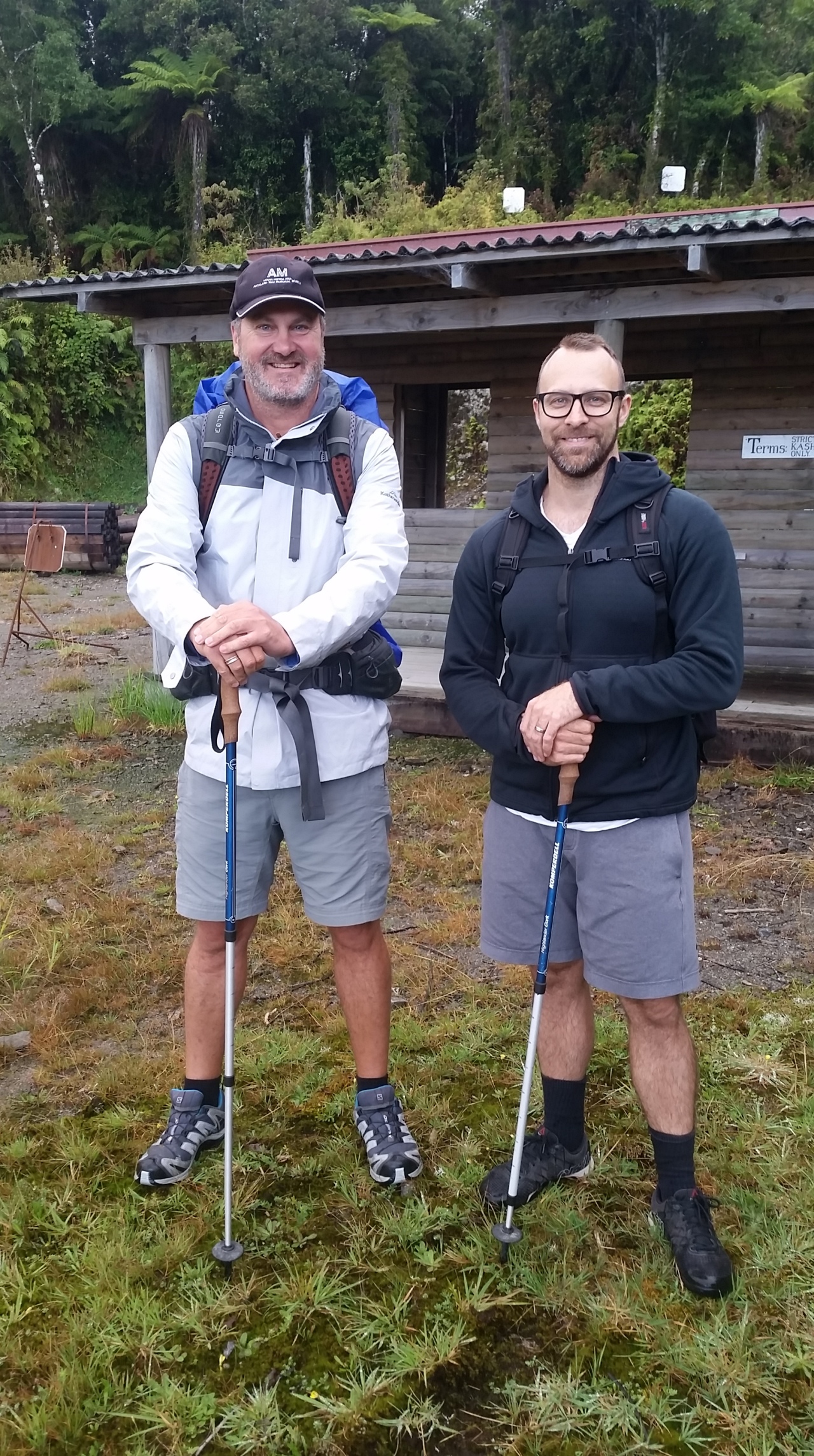 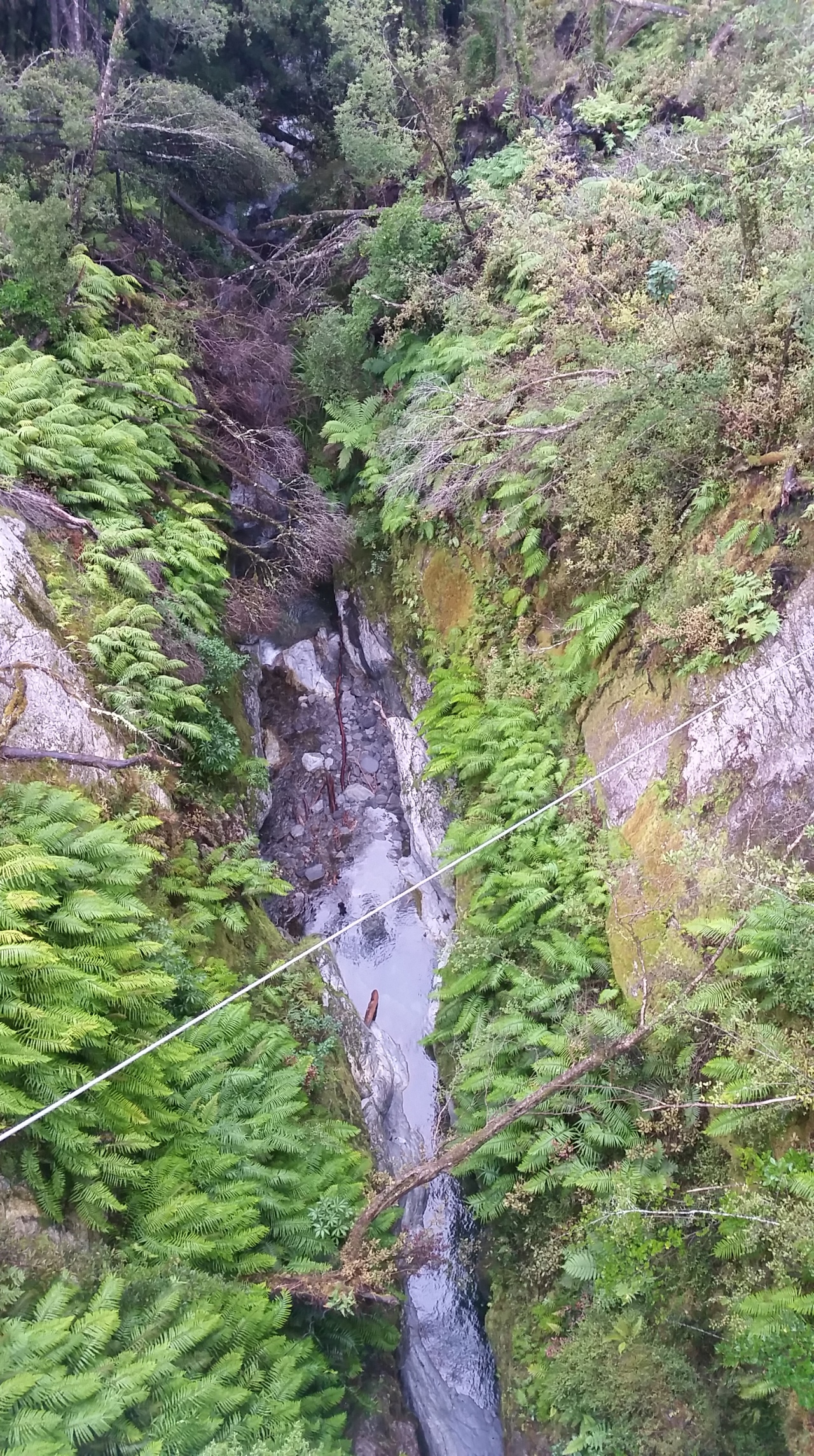 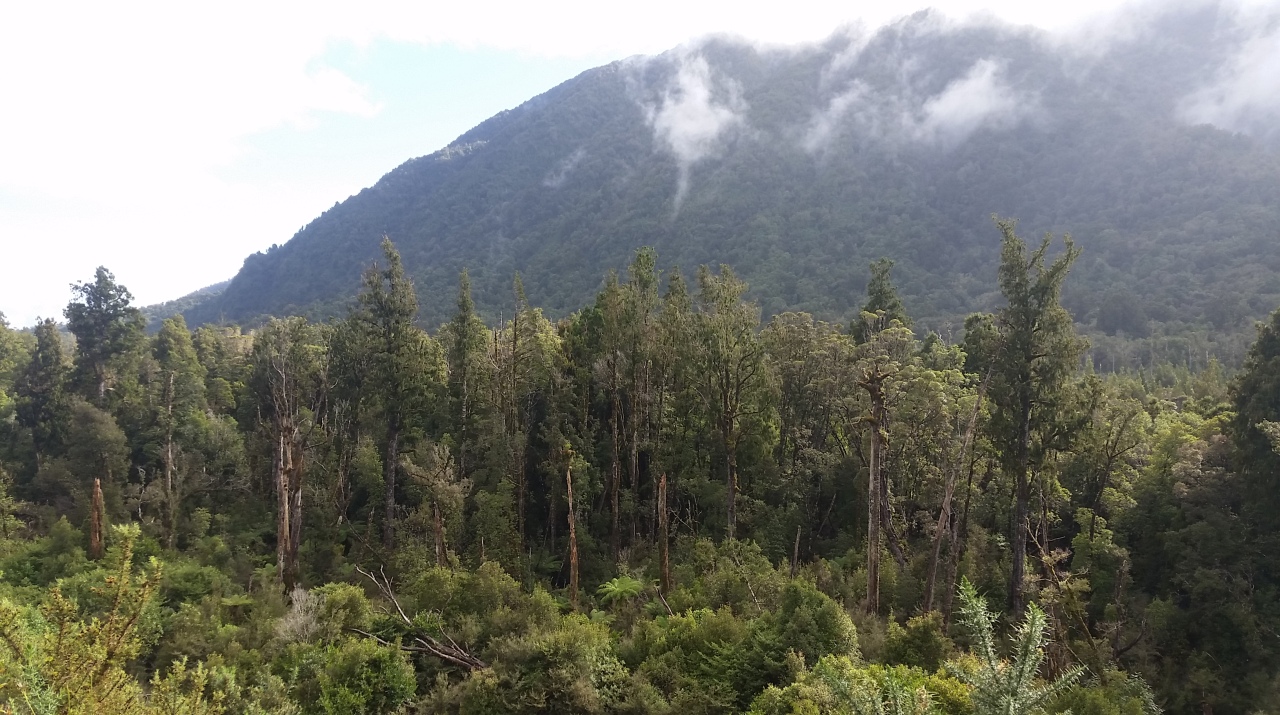 We soon come across a concrete weir at the top of a water race. The channeling of water for generating power has commenced already, way up here on the mountain side. We continue steadily to the Kawhaka pass near Kerrs Creek (hello namesake) and then move down the Kawhaka valley adjacent to the stream of the same name. Island Hill or Tumuaki is on our left hand side and 1373m Mt Turiwhate to the right. Both are covered in regenerating podocarp forest of rimu, kahikatea, kamahi and birdsong is everywhere – they must be happy the sun is out as much as we are. It is here that we cross the Alpine Fault – a virtual straight line running from Milford Sound to Marlborough it is the meeting point of the Australian and Pacific plates. The Alpine Fault has moved significantly roughly every 300 years – the last one was in 1717. Eek! It wasn’t to happen today however, not even the tiniest of tremors was felt as we chatted away on the walk down the track towards the Old Christchurch Road. There are Whio nesting on the river banks however we were not lucky enough to spot any today. We stopped to chat with Paul Sinclair at his property which straddles the river. He is a passionate local businessman and historian who is keen on environmental protection. He welcomes cyclists to his beautiful spot and he has a quaint little hut built up on the opposite bank that can be rented. Sadly though we were being eaten alive by the sandflies – they must have been starving as they were the worst that I experienced in the South Island and their bites were still evident a week later. 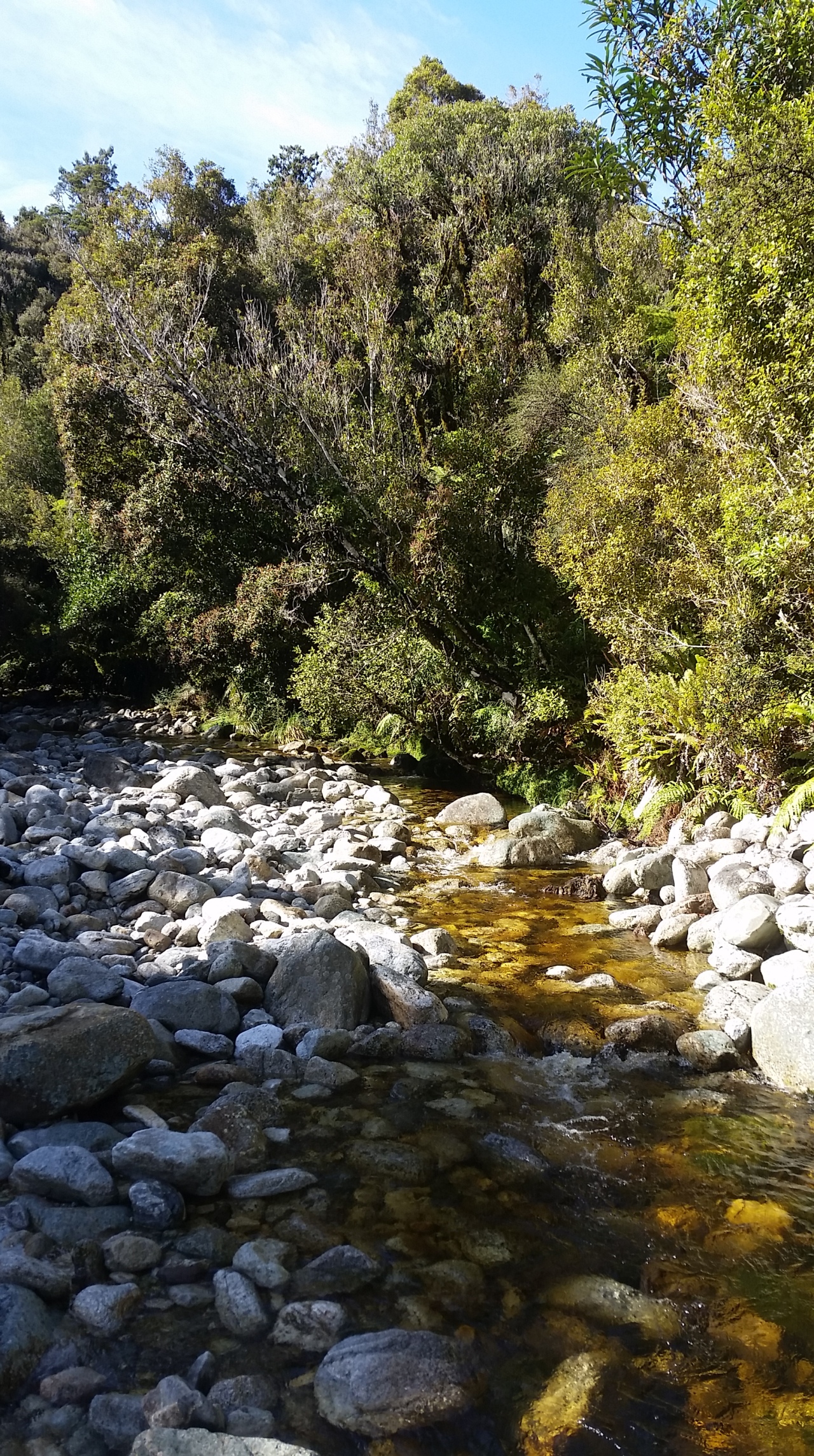 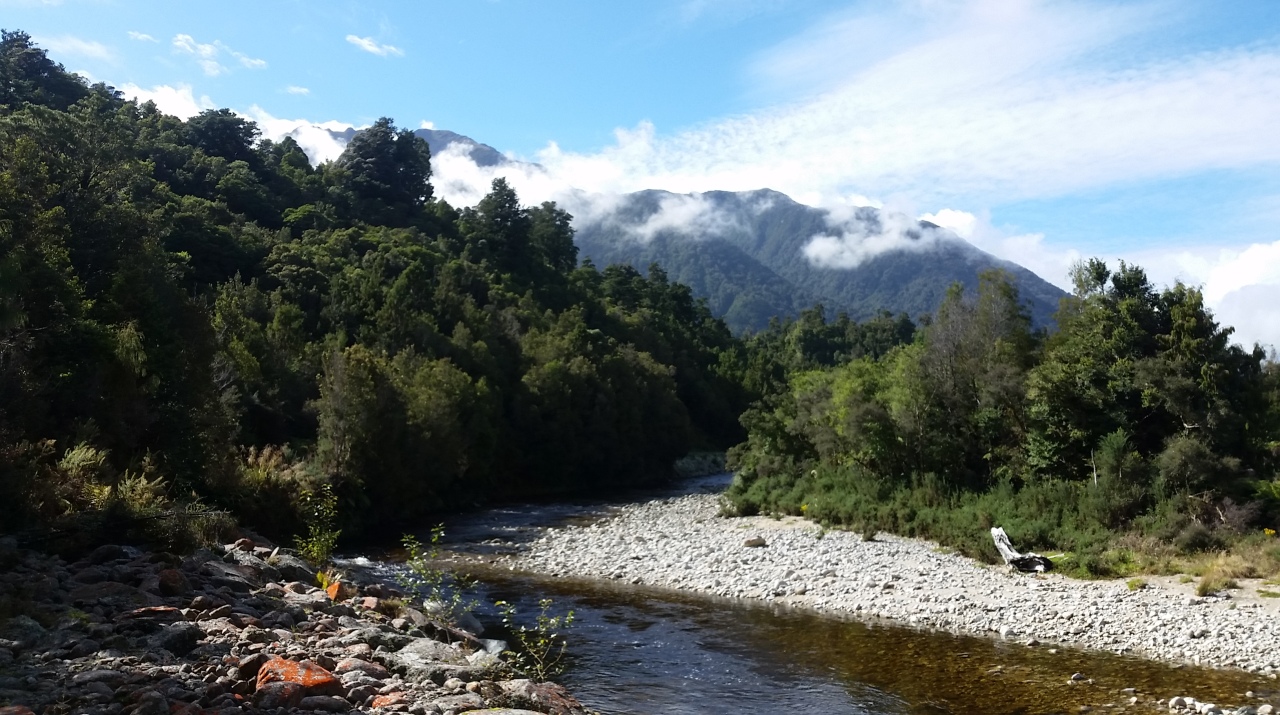 After traversing the Old Christchurch Road we joined the Loopline Road which was a very boring metal road which followed power lines and was bordered with non descript vegetation. There were the odd blackberry bushes to graze but for the most part it was better to keep the conversation lively as the road was dull. A water race commenced again and we followed this downstream to reach the boardwalk across the marshland above the Loopline reservoir. The feet were becoming a little tired at this point so we took advantage of some bench seating on the boardwalk to take a rest. We have completed approximately two thirds of the walk by this stage, there still being some distance to cover until we will reach Kumara. At the Loopline reservoir we get to see the dead trees in the lake – they were drowned when the water level was raised to provide additional capacity in this catchment reservoir which lies above the Kapitea reservoir. The Loopline reservoir has an attractive stone faced dam that was hand-laid in 1883 by miners during the gold rush. We continue along the wall of the Kapitea reservoir for 5km to its dam which descends to a small power station and from here access a metal back road on the last push through to Kumara. 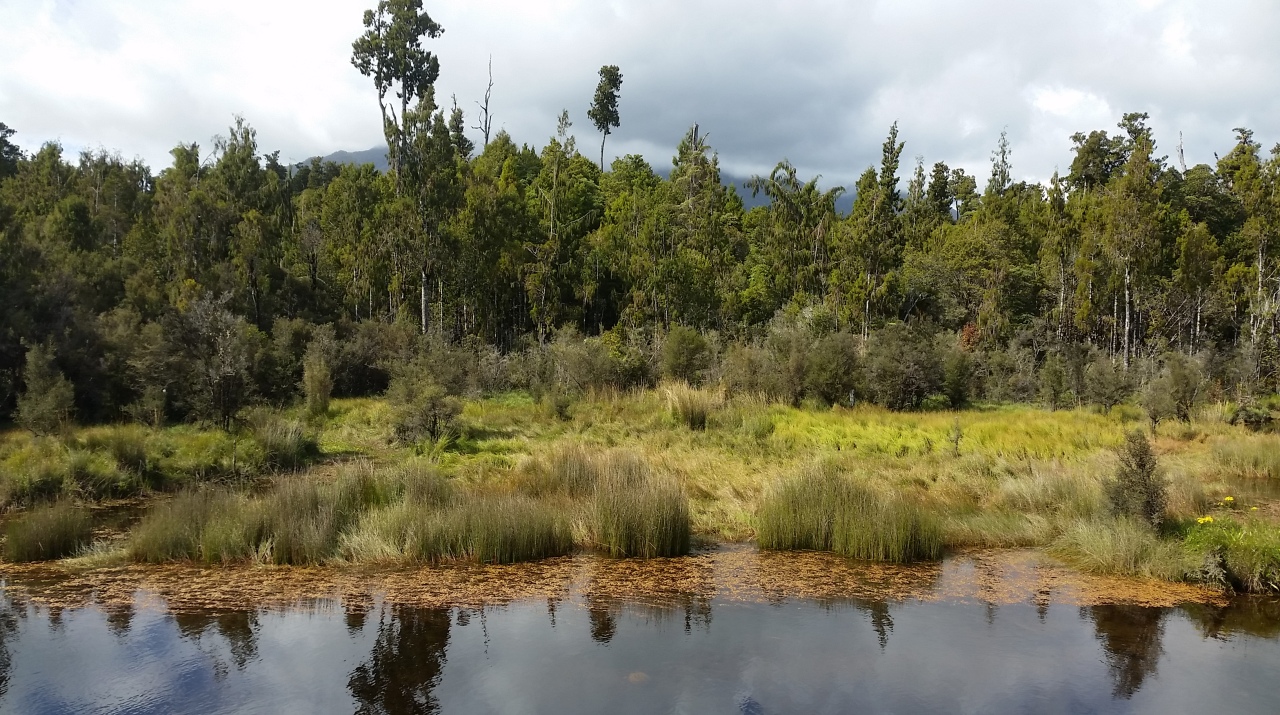 Just before Kumara we take a side track to see the ‘Londonderry Rock’. Nick might have been adverse to this extra walking by this stage but being the trooper he is didn’t bemoan the deviation. The rock itself is about 8 metres high and estimated to weigh between 3000 and 4000 tonnes. It is a glacial erratic, carried here by the Taramakau Glacier and deposited when the glacier retreated. The rock was dislodged by sluicing around 1880 and fell with a thud that shook Kumara and stopped the local post office clock.  This huge boulder was too large for the miners to move or break. The track leading to the rock is formed by mounted tailings from the slucing opertion. They are mountains of stones hand carried and stacked, even higher than the tree line. It is the most unusual landscape and a testiment to the bloody hard work these miners had back in the day. Moss growth and the occasional rimu gave the path a slightly fantastic look whch I likened to being somewhere out of a Hobbit movie. And then we were out. The folks were in a carpark at the end of the track however Nick and I continued walking for the last 2km to the section finish in Kumara. What a relief to get into the car and on our way into Greymouth. Ma & Pa had secured great motel style accomodation at the Top 10 Holiday Park where Nick and I could have a relaxing spa to ease weary feet before dinner. Thanks for the company today Nick, it was great to have you along for the walk. 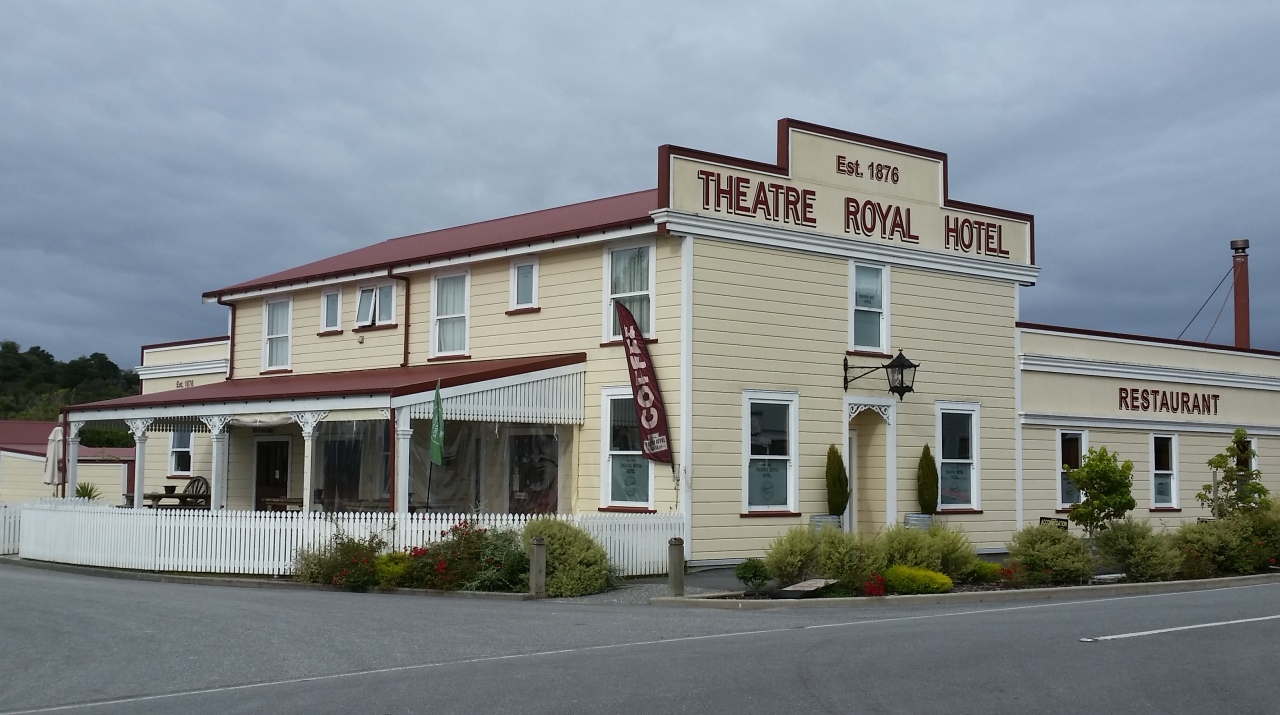 Combined road and rail bridge between Hokitika and Greymouth